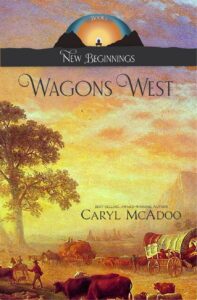 This is book one of the New Beginnings Family Saga series, Historical Romance Fiction read.   Blaire a widow with three children sells everything and is determined to get on the wagon train to California to get gold.  When Ambrose, the wagon master is not going to allow her on his trip, until, he needs to fill the seats.  He gives in and the journey begins.  They come across many different situations that put Ambrose into a tail spin.  Blaire is still determined to keep her faith and keep her kids safe.  They must get to California.... Can they survive?  Will this dangerous journey be what Blaire wants it to be in the end?

I would recommend this if you like history reads that take you back into the western days.  It is a page turner that makes you wonder if Blaire is really making the right decisions and keeping her faith.  It is book one and I look forward to the story continuing.

In all your ways acknowledge Him, and He will direct your paths.

Besides the God-fearing, decent folks seeking new beginnings, adventurers, miners, risk-takers, fugitives, perverts, and runaways alike—even royals—comprise a few of the characters in book one of the ‘New Beginnings Family Saga’ titled WAGONS WEST. The two-thousand-mile journey is wrought with danger, trials, troubles and tragedies, deprivations, and of course, romance, but the lure of gold and a fresh start urges the sojourners on to the Promised Land!

Blaire Beechy, a widow with two almost grown daughters, Adeline and Beatrice, and a twelve-year-old son Tucker sells everything to go for the gold only to discover the rules of wagon master Ambrose Lee forbids them to join his wagon train, but the widow is determined. Though the disgruntled and handsome widow turns his head, the man deals with troubles of his own. His train isn’t full, he has yet to hire a scout, and his integrity thrusts him into saving a troubled young woman called Birdie. The journey is an arduous undertaking, but he’s done it before and is up to the task.
Wagon Ho!

Award-winning author Caryl McAdoo prays her story brings God glory, and her best-selling stories—over sixty published now—delight readers around the world. The prolific writer also enjoys singing the new songs the Lord gives her; you may listen to a few on YouTube. Sharing four children and twenty-four grandsugars (six are greats), Caryl and her high-school-sweetheart-husband of fifty-four years Ron live in the woods south of Clarksville, seat of Red River County in far Northeast Texas. The McAdoos wait expectantly for God to open the next door.

What a fun, new adventure writing WAGONS WEST! Ron and I stepped up to try a new program Amazon offered authors called Kindle Vella where we’d write episodes rather than chapters. In a year’s time, WAGONS WEST had thirty-five episodes and was over one hundred thousand words, about four hundred pages.

We continue to write Season Two of the “New Beginnings Family Saga” SETTLERS & TOFFS, with the same characters going into the following year, 1850, scattering into three settings: those from Season One’s wagon train who decide to settle Auburn, California, those just starting the sojourn west with Emmerson Pierce, scout in Season One, now wagon master, and we sail the Atlantic to England when the son of the Earl of Farnsworth receives word of his older brother’s death.

The characters in WAGONS WEST made it so special for me, and I believe you’re sure to love them as well. Robert E. Lee’s older brother Ambrose is our wagon master and the story’s main hero. As all my heroes (thanks to Ron’s part of our collaboration) he is strong but flawed.

Our matriarchal heroine Blaire Beechy, recently widowed, has sold everything and uprooted her three children—two almost grown daughters Adeline and Beatrice and their twelve-year-old brother Tucker—only to discover Captain Lee’s idiotic rules forbid an unmarried woman from traveling in his wagon train. Why must there be a man at the head of each family?

WAGONS WEST offers readers adventures with a colorful cast of characters who support, cause trouble, act a bit crazy, and play ball to make the story one you just can’t put down. All along the way, God is questioned,  given praise, denied, and surrendered to, saving sojourners again and again—not only in the spiritual realm.

As always, I’m ‘Praying my story gives God glory!’ Hallelujah! There is no one like Him! He alone is the Great King over all the earth! Not a man that He could lie, but worthy to receive all glory and all praise!

To celebrate her tour, Caryl is giving away the prize of a $50 Amazon gift card and a copy of the book!!