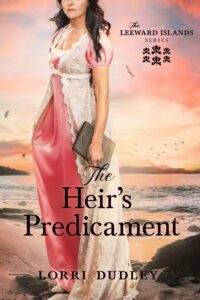 This is book 6 of the Leeward Islands series, Christian Historical Romance read.  Maggie is determined to find her family history and sets out to Leeward Island.  Samuel has been sent to the island to prove that he is part of the family. While on the Island he works a sugar plantation, only to come in contact with Maggie.  Maggie is determined that is her plantation.  Will they both find what they are looking for?  Could they find they have more in common?  What does the future bring for these two and why are they both on this Island?

I would recommend this if you like a light romance with twist and turns.  It is a great addition to the series, but can be read as a stand alone.  I enjoy all books in the series and Leeward Islands adventures take you to a relaxing afternoon read.

He controls the answers to her past and future, but she threatens his inheritance and his heart.

Maggie Prescott may not know her real name, the circumstances of her birth, or her father’s identity, but based on a song her shipwrecked birthmother taught her before she died, Maggie’s certain the answers lie on the island of Antigua. Unbeknownst to her beloved adopted family, she sends her maid to finishing school in her stead and convinces her uncle, Captain Anthony Middleton, to sail her to the Leeward Islands. Time is of the essence to discover her heritage before the next family gathering exposes her duplicity.

Lord Samuel Fredrick Harcourt Granville was groomed to inherit the Cardon title and lands, but the possession of his father’s temper has put Samuel’s future in jeopardy. After discovering his fiancée cavorting with his so-called friend, the ensuing altercation lands Samuel in court before of the House of Lords. As an example, for all aristocratic sons to quell their hedonistic living, the House of Lords banishes Samuel to the island of Antigua until he can prove he’s worthy of his privileged birth.

On the island, Samuel works to rein in his temper and revive a dying sugar plantation. Still, his return to England and all his efforts are threatened when a mysterious woman breaks into his island home, claiming to be the true heiress of the sugar plantation. Guilt, resentment, and fresh yearnings sizzle under the island sun as Maggie’s search uncovers a much greater treasure than either of them expected.

Lorri Dudley has been a finalist in numerous writing contests and has a master’s degree in Psychology. She lives in Ashland, Massachusetts with her husband and three teenage sons, where writing romance allows her an escape from her testosterone filled household. Find her online at www.lorridudley.com.

Maggie first appeared in The Captain’s Quest as the feral child shipwrecked on a deserted island. Readers fell in love with her character and emailed me, hoping to learn more of her story. It didn’t take much coaxing for my imagination to delve into how a child, who’d lived outdoors and struggled with daily survival, would adapt to Regency England’s intricate social conventions of the le bon ton as a grown woman.

Like Maggie, my grandfather and mother-in-law were both adopted. Each felt a disconnection from their roots and a natural yearning to fill a void by learning their origins. The thriving industry of Ancestry.com and 23-and-Me exists due to this pervasive desire to understand one’s background. Understandably, Maggie longs for answers, but the guilt of being disloyal to the family who accepted her into their loving home temps her to fabricate a lie and cover up her journey to the island of Antigua.

Another driving force for Maggie is that in Regency England, questionable heritage could hinder an adopted child from marrying within the upper social ranks. Unknown lineage could taint noble bloodlines, and many aristocrats wouldn’t dare align their families with someone of uncertain origins. Maggie’s marriage prospects would have been limited unless she uncovered her past. She’d have been considered too risky to wed among the gentry but raised too highborn to marry within the lower classes.

The Heir’s Predicament is the last installment of the Leeward Island series, and I will miss immersing myself in the rich cultural history of the Caribbean. I loved exploring different isles and island-hopping with readers through various settings. The island of Antigua, where The Heir’s Predicament is set, boasts of ninety-five miles of scalloped coastlines, white and pink sand beaches, a tropical but arid climate, windmills and plantations, and a sugar and spice history complete with Caribs and pirates. Island tensions create a lively setting and weave their way into the characters’ stories, for instance, the push and pull between the island’s calming beauty and battering storms, water abounding but not much of it drinkable, a laid-back culture of hearty survivors, and a legacy of slavery versus colonization.

The journey, however, isn’t over, my next series will take place in the rolling hills and quaint towns of England’s Cotswold, but there’s hope of a Windward Island series in the future.

To celebrate her tour, Lorri is giving away the grand prize of a $50 Amazon Gift Card!!