On My Honor ~ Patty Smith Hall 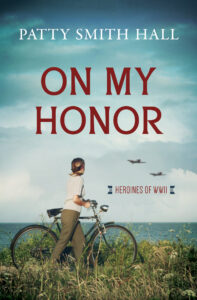 This book is part of the Heroines of WWII series, Christian Historical Romance read.  Ginny wants to take her nurses degree and get out of the Outer Banks.  When she feels that she must stay and help her family while her father is gone. With the war Ginny finds herself helping the Oregon ferry service look out for German boats.  Ginny finds that she along with her sisters Girl Scout Troop keeping watch and alert for the Germans.  They find Tim in need of help and step up to help him.   Ginny wonders who this man is and if the girls are safe, if they are all safe?  Who is this man and what is he doing here?

I would recommend to those that love a good history read with mystery, drama and faith.  If you have been reading this series, this is a great addition and you will love it.  This and all the others in the series can be read as stand alone as they are all about different women during the War.  This is a great series about what women did for our country during this time.

Book: On My Honor

Ginny Mathis was finished with nursing school and had no intention of staying rooted in the Outer Banks—then war broke out. With her father away, she feels duty-bound to stay and help her mother and younger sister. While working as a clerk for the Oregon Inlet ferry, naval officers ask Ginny and others to be watchful for German U-boats reportedly spotted in the area. So to help occupy her teenage sister, Ginny enlists the Girl Scout troop she leads to help watch for suspicious activity along the coast.

Timothy Elliott is no stranger to death. As a British reporter working with the M-6, he’s numb to the losses of war after two years of fighting the Germans. Maybe that’s why he volunteered for this mission—to connect with an ex-German naval officer who stole the Furor’s battle plan for the Atlantic war. When the boat giving him passage to New York is bombed near the Cape Hatteras Lighthouse, Tim is thrown from the boat and wakes up in the care of a group of young girls.

Ginny follows her sneaky sister on a clandestine mission and discovers the shipwreck victim. Ginny knows she must take charge, but is this man the enemy, or does he hold secrets that could turn the tide of the Battle of the Atlantic in the allies’ favor?

Multi-published author Patty Smith Hall lives near the North Georgia Mountains with her husband, Danny. When she’s not writing on her back porch, she’s spending time with her family or working in her vegetable garden.

Did you know that the Girl Scouts (or Girl Guides) serviced as spies on HIs Majesty’s Secret Service during World War One? I didn’t either until I picked up a book on female spies at my local Barnes and Noble. There were only two paragraphs about how the girls worked with the MI5 for the duration of the war. It was enough to get my heart pumping!

Being a former Girl Scout myself, I was amazed at what these young girls did to help our country during the war. What activities did the Girl Scouts/Girl Guides do in World War II? Anything asked of them. They organized drives for anything from fat (to make bullets) to paper, stepped into positions left vacant by men serving on the front and worked Victory gardens to provide food for their community. They did so many things, I can’t begin to name them all here. By March 1944, the Girl Scouts had provided over 15 million volunteer hours toward the war effort.

Isn’t that amazing? No wonder I had to write a book about them!

To celebrate her tour, Patty is giving away the grand prize package of a $25 Amazon e-gift card and a print copy of the book!!