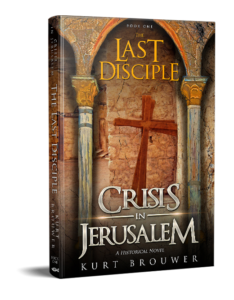 This is book one of The Last Disciple series, Christian Historical Inspirational read.  It takes place during 62 AD in Jerusalem and is the story of John, after the death of Jesus.   John finds himself having to make difficult choices, follow God's word and struggle with making the right decisions.  John knows what God tells him to do, however, it is a life of struggles and heartache.  Will John keep his faith, and do God's work, no matter what the cost is?  Can he keep his people and Jerusalem safe and for God?

I would recommend this to anyone that loves biblical reads and history.  It is a good read of inspiration.  It makes the reader look at a different time and era of what Jesus had planned for God's people.  John gives a new outlook on how it could have been after Jesus died for us.

He was the Beloved Disciple…

…and he would be the last.

The mantle to tell the whole story has fallen on him.

From the cross, Jesus entrusted John, the youngest disciple, with the welfare of Mary, Jesus’s mother. Over thirty years later, as Jerusalem becomes a cauldron of explosive tempers, he receives a calling he doesn’t want.

And if he does, will it be too late?

In 62 AD, the Jewish high priest executes James, the brother of Jesus, triggering a bitter fight for power in Jerusalem that shatters the quiet life of John. The Jewish people he loves are making dangerous choices that will change the land of Israel forever.

Should he stay in Jerusalem and help hold off the Roman onslaught? Or is it time to reach out to those beyond Israel’s borders?

If he chooses to leave, what will be his message to these foreign believers? What new words of comfort could he possibly share?

Set against a backdrop of actual events, The Last Disciple: Crisis in Jerusalem is the first novel in a new series based on the Bible and Christian history.

Follow along while John faces multiple crises and comes to understand what it is to stand alone and lean on only the Lord.

Your heart will embrace The Last Disciple: Crisis in Jerusalem because John’s story is the story of our hope and promise.

Kurt is a Christian writer, living in Hawaii. A few years ago he did a study at his church on the Apostle John. That little project got him hooked on the man who started out life as a fisherman and then became a disciple of Christ.

The more he learned, the more he wanted to know. What did John do after the Crucifixion? Why did he wait so long to write the Gospel of John? Where did he live for the last 60 years of his life? This historical novel came out of the research he did to answer those questions.

He started a blog (KurtBrouwer.com) a few years ago. On it he has written over 100 blog posts and a few Christian booklets.

About 85 AD, more than fifty years after the death and resurrection of Jesus Christ, the Gospel of John struck the Christian world like a lightning bolt out of a clear blue sky. At that time, few Christians even knew that one of the disciples yet lived. After all the years, decades even, a new book of the Bible came out, written by the last disciple of Christ.

Who was the last disciple?

John the son of Zebedee walked with Jesus during his ministry on earth. He witnessed the Crucifixion and later entered the empty tomb after Jesus rose from the grave.

John, the youngest of the disciples, outlived all the others. In fact, John, the last disciple of Christ, lived for more than 60 years after Jesus died on the Cross. But who was he? And what did he do all those years? Where did he live? With whom? What do we know of him and his life?

John walked with Jesus when he was young, probably a teenager or very early 20s. He and Andrew were the first discples of Christ. John lived so long that he became the last disciple too.

A few details about John

I got hooked (pun intended) on John early one morning

One morning I read a short piece from BibleGateway.com by Jonathan Petersen, When Was Each Book of the Bible Written? In it, Petersen gave the approximate dates when all the New Testament books came out. The first, written by James the brother of Jesus, came out around 44 AD or as late as 49 AD. The most widely accepted year for the Crucifixion is 33 AD, so the first book did not come out for at least 11 years after Christ died.

The next New Testament book to come out was Paul’s letter to the Galatians, around 49 AD. After that came the gospels of Mark and Matthew. Other books such as Luke, Acts, and all of Paul’s letters came along in fairly short order. Peter’s two letters came out and then the book of Jude, about 68-70 AD. Then, for at least 10-20 years, no new Bible books came out.

The silence was broken

Finally, the silence was broken. After all the years, decades even, the words of one who walked with Jesus came forth. The Gospel of John came out written by a man who saw the empty tomb after Jesus rose. A man who would write five books of the Bible:

A unique voice came forth

As John’s gospel spread from church to church, a unique voice came forth. What a miracle that must have been to first century Christians when the Gospel of John appeared!

That’s it for now. We will continue with more in future posts on the saga of the last disciple of Christ. If you can’t wait, watch the video above.

Yours in Christ, Kurt

To celebrate his tour, Kurt is giving away the grad prize of a $50 Amazon gift card!!