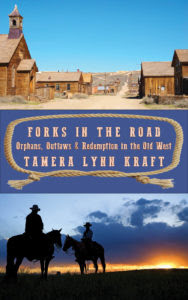 Orphans, Outlaws, and Redemption in the Old West!

A classic Western tale of Joshua and Jonathan Jackson, brothers orphaned during the Civil War. They needed someone to give them a chance, but the war-torn countryside and people had little to spare.
After the war, the teen brothers headed West to find their fortunes and escape their past. Instead, they found a hard land and nobody willing to lend a hand. At every fork in the road, fear, grief, or pain prompted them to choose the wrong path.

By the time they were grown men, they had traveled so far into trouble, there was no way out except prison or death. They had one chance for redemption. Would they take it?

If you’ve read LOST IN THE STORM, you met Jed Jackson – this is the story of what happened to Jed and his brothers.

Award winning author Tamera Lynn Kraft has always loved adventures. She loves to write historical fiction set in the United States because there are so many stories in American history. There are strong elements of faith, romance, suspense and adventure in her stories. Alice’s Notions, Red Sky Over America, Lost in the Storm, Resurrection of Hope, and Soldier’s Heart are among her published works.
Tamera been married for 40 years to the love of her life, Rick, and has two married adult children and three grandchildren. She has been a children’s pastor for over 20 years. She is the leader of a ministry called Revival Fire for Kids where she mentors other children’s leaders, teaches workshops, and is a children’s ministry consultant and children’s evangelist and has written children’s church curriculum. She is a recipient of the 2007 National Children’s Leaders Association Shepherd’s Cup for lifetime achievement in children’s ministry.

I have always loved westerns. As a child, I remember watching shows on television like Gunsmoke, Bonanza, Maverick, Big Valley, Alias Smith and Jones, and many others. I also loved the great western movies such as High Noon, The Quaker and the Bad Man, Three Godfathers, and Stagecoach. My favorite were the stories with an element of redemption in them. There is no better redemptive story than a man’s man out on the trail realizing he needs God.
Three Godfathers with John Wayne is my favorite movie. I first watched it when I came home from the hospital after giving birth to my first child. John Wayne plays an outlaw who, with his two friends, robs a bank and escapes into the desert. The outlaws happen on a wagon where a woman is giving birth. She dies shortly after. They have a choice. Either they risk their lives and freedom saving the child, or they leave the child to die and get away with the loot. I highly recommend it.
When I decided to write Forks in the Road, I wanted to capture that redemptive spirit in many western novels. Joshua and Jonathan are brothers who were orphaned at the ages of 10 and 12 when Quantrill’s raiders ravaged Lawrence, Kansas. They headed west to make it on their own, but at every fork in the road, they made wrong choices. They grew up and became outlaws, but they never became hardened or callous toward others. Even so, God had a plan of redemption for them. Would they take it?

To celebrate her tour, Tamera is giving away the grand prize package of a $25 Amazon gift card & copy of Forks in the Road!!