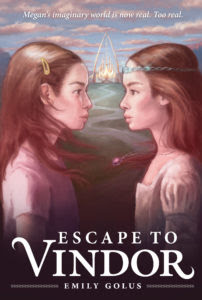 
For as long as she can remember, Megan Bradshaw has imagined herself as the heroine of Vindor, her own secret world populated with mermaids, centaurs, samurai, and more. When school pressures and an upcoming move make life unbearable, Megan wishes she could escape to Vindor for real.
And then she does. Megan finds herself trapped in Vindor, with flesh-and-blood versions of her imaginary characters. Dreaming about being a hero and actually fighting monsters are two very different things–especially when the Shadow, the frightening creature now tearing Vindor apart, is one Megan doesn’t remember putting there.
Megan, playing the part of her alter ego, Selena, embarks on a dangerous journey, accompanied by a know-it-all centaur and a goblin she’s not sure she can trust. Will the Shadow destroy her before she can find a way to save her world?

Emily Golus has been dreaming up fantasy worlds since before she could write her name. A New England transplant now living in the Deep South, she is fascinated by culture and the way it shapes how individuals see the world. Golus aims to create stories that engage, inspire, and reassure readers that the small choices of everyday life matter.

Her first novel, Escape to Vindor, debuted in 2017 and won the Selah Award for young adult fiction. Its sequel, Mists of Paracosmia, released in April 2019.
Golus lives in Upstate South Carolina with her woodworking husband, an awkward cat, and the world’s most talkative baby.

In Escape to Vindor, teen Megan Bradshaw spends nearly every quiet moment she has in a world of her own imagination. Writing this part of Megan’s story came naturally to me, because that was the way I spent my adolescence, too.
While other girls were thinking about—I don’t know what they were thinking about, actually. Boys, maybe?—I was creating epic melodramas about rival mermaid queens or magical rainforest civilizations. The world of my imagination filled my quiet life with vivid technicolor.
My stories also helped me survive. Worldbuilding was a welcome escape from my ever-growing list of fears.
See, I was the extra-good girl, the one who followed every rule to a T, always giving a hundred and ten percent. Few people suspected I did all of this not because I had a lot of drive and confidence, but because I thought I had to be extra-perfect in order to be loved—by people, and by God. I had a deep-seated terror of making one little mistake, losing my way, and being abandoned forever.
The world of Vindor started out as a private daydream, a way for me to work through my anxieties. But as I grew, I discovered something amazing—and the story took an unexpected turn.
I wrote Escape to Vindor for the dreamers, the bookworms, and anyone who enjoys dazzling new worlds. More importantly, I wrote it for the quiet ones who struggle without anyone knowing, who need to hear: You are seen, you are known, and you are loved.

To celebrate her tour, Emily is giving away the grand prize package of signed copies of both Escape to Vindor and Mists of Paracosmia, an amethyst pendant, and a $25 Amazon gift card!!
Be sure to comment on the blog stops for nine extra entries into the giveaway!
Click the link below to enter.
https://promosimple.com/ps/f663/escape-to-vindor-celebration-tour-giveaway
Email ThisBlogThis!Share to TwitterShare to FacebookShare to Pinterest
Newer Post Older Post Home