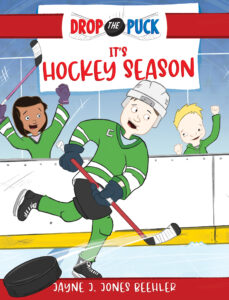 This is book one of the Drop the Puck series, a young readers book.  It is about 2 brothers that love hockey, one is the team captain and one is the manager.  Blaine, the team manager has down syndrome and Cullen is the team captain that takes his hockey seriously.  When Cullen gets upset with the game, he takes it out on his brother and says some harsh words that hurts Blaine's feelings.  Can the brothers overcome this hurt?  Can the team survive?  What will be the outcome to resolve this issue.
If you have a young reader that loves hockey, this is a good story to have them read that deals with feelings and working as a team.  I received the Ebook for a review and the format was not easy to read and the drawings were not lined up.  I would recommend to purchase this as a paperback or hardcover version.  It is a good story and if the book had a better format it would have been really good to read to my pre-k class and discuss.  This is good for young children that are good reading on their own.

It’s Hockey Season tells the tale of two brothers, Blaine and Cullen, who love ice
hockey and each other. Cullen is the all-star team captain and his brother Blaine,
who has Down syndrome, is the team manager. Blaine is clearly the unsung hero
of the team; his leadership and unselfish actions speak louder than words. Young
readers are able to learn respect and a better understanding for the challenges
individuals with special needs face on a daily basis.

Jayne J. Jones Beehler is a lifelong hockey fan who is also an advocate for children

with disabilities. She serves as a government and legislative affairs project
management consultant dealing with such issues as opioid addiction, juvenile
justice, foster care, higher education, and education reforms.

Jayne is a former history professor for Concordia University, where she was named
Political Science Professor of the Year in 2017. She holds a B.A. degree in Political
Science and a law degree from William Mitchell College of Law.

She serves as national legal advisor for the American Special Hockey Association
and is the founder of Margaret’s Missions, a chaperone travel program for people
with special needs.

Jayne resides with her husband and daughter in Wisconsin and Florida.

“This book has great lessons for kids everywhere! I’m so happy my good friend Ann and the

American Special Hockey Association can be an inspiration for so many people!”

accepting those who may be different and working together as a team.

It’s important to lead by example and treat everyone with the same respect.”

To celebrate her tour, Jayne is giving away the grand prize package of a $20 Starbucks gift card and copy of the book!!