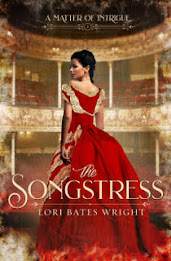 This is book 1 of the A Matter of Intrigue series, this is a Christian Historical read.  The Pinkerton Detective Agency, is filled with the best women spies that the country has and they are fighting crime to get justice served.  When Juliana is on stage at the theater she witnesses President Lincoln being shot.  She finds herself headed to Texas and being partnered up with Cade, the man that she finds is not to keen on a female partner.  When they team up to fight the political crimes, they find themselves in a whirlwind of suspense and drama.  Can they work together and find the criminals? How will the Pinkerton Agency agents get their man or women? Does Cade become intrigued with Juliana or will he stay stern in his belief about women in the agency?
If you want a good fast paced drama, suspenseful and light romance read, then pick up this book.  This book has good history being told along with dealing with forgiveness, faith and love for one another.

Rising opera star, Juliana Chamberlain, still has nightmares of the night she witnessed the assassination of the President of the United States from her spot on stage at Ford Theater. Recruited by The Pinkerton Detective Agency, Juliana was instrumental in bringing those responsible to justice.

Now, two years later, the Pinkertons ask her once again to join forces in exposing a corrupt political organization terrorizing her home in Texas.

Texas Ranger, Cade Matlock, has a job to do. He needs no help from a meddlesome diva with big ideas. However, he is a man of his word. He’s committed to partner with the lovely songstress to smoke out the mastermind of a dangerous clan who has proven he will stop at nothing to satisfy his thirst for vengeance.

Cade and Juliana soon discover their greatest strength is in working together until shadows of the past threaten to destroy their future.

Lori Bates Wright is an award winning author with a love for history.

Raised in New Mexico, Lori now lives in Texas with her husband of 38 years. She has two grown kids and four adorable grand boys (who leap tall buildings in a single bound!) When she’s not writing, she’s heading up small group ministries with her husband. She enjoys speaking and interacting with women of all ages.

Growing up, my family loved to laugh.

Some of my favorite childhood memories are centered around my grandmother’s dining room table listening in while my parents, grandparents, aunts, and uncles told amazing stories. Sometimes I laughed until I’d lose my breath. Sometimes I sat quietly, taking in the bravery and perseverance shown by those who’d gone before me.

History has been a passion ever since. Couple that with an insatiable love for story and there you have the heart of what inspires me to write.

So, when it came time to brain-storm for this brand new series, I decided to take a known historical event and think about it from every angle. Beyond the recognized players, to the “what if” characters that might have played a role. And, ultimately, how such an event would have changed the course of their lives.

Thus, a star was born.

In THE SONGSTRESS, Juliana Chamberlain witnessed the assassination from her place on the stage. Because I love a little mystery and intrigue, I decided that the leading detective agency of the day would have enlisted her help in identifying the accomplices. Allen Pinkerton had been known to hire a lady detective or two, so she would be trained by the best. Her investigative skills proved helpful in bringing a quick resolution to the case.

Fast forward four years and she’s still haunted by what she saw that night. When Pinkerton again approaches her about a case involving her family in Texas, she accepts.

Being from Texas, I was so happy she did. I’ve wanted to write a story based in the Lone Star State for quite awhile. I loved visiting Georgia and the shores of England in my last series, but I have to say it was good to bring this one home. With all the rugged charm of the post-Civil War era, this book has a little more local flavor than my last three. Al-in-all, I believe my readers are in for a treat. A new cast of fun, quirky characters as we revisit a significant time in our nation.

To celebrate her tour, Lori is giving away the grand prize package of a Texas Gift basket including a signed copy of THE SONGSTRESS and a $25 Amazon Gift Card!!