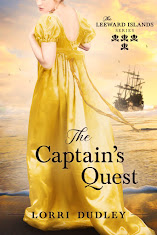 This is book 4 of the The Leeward Islands Series a Christian Historical Romance read.  When Pricilla attends a party to only be able to watch over her friend, little did she expect what would happen.  She finds that not be caught at this party, she pretends that she is only there to visit her brother.  She finds that while trying to see her brother the ship takes off leaving her sailing with it and no place to go.  She finds a hiding place, but is not hidden for long... she makes the mistake and is found by Captain Tobias who is only on the ship as a fill in Captain, he can't go back, he has to keep the ship going to England.  What will he do with Pricilla?  How does Pricilla explain herself? What does the past have to do with survival for both?

If you have been reading this series, then you know how wonderful these books are and this one is just as good as the first one, but can be read as a stand alone.  This book is a fun Hallmark movie adventure that you can't stop reading, you feel for the characters and cheer for them to both find happiness.  Love this series!

Innocent mistakes can have dire consequences.

Pricilla Middleton only attended the Lemoore house party to keep her friend out of trouble. Now, her only chance to keep from becoming a gossip column headline is to sneak aboard her brother’s ship and pretend she’d been visiting him instead of taking part in the debacle. Before she can speak to her brother, the ship sets sail, and the man in charge is not at all who she expects.

Captain Tobias Prescott, son of an infamous war hero, has been assigned on a critical mission to deploy warships in St. Kitts for battle in New Orleans. Unfortunately, his orders require him to assume command of a friend’s ship, and he must weigh anchor the instant the former captain is escorted down the gangplank. When they reach open waters, the last thing he expects is to find a woman hiding in the captain’s cabin, yet his mission is too urgent to return her to England.

The Middleton name has always brought Tobias trouble, and Pricilla is no exception. As the waters clear and the temperature warms, the danger escalates too. Yet Tobias discovers the intuitive and strong woman who struggles to hide her anxiety is nothing like her disloyal brother. He may lose the opportunity to help his country, but perhaps he can still save the woman who’s rescued his heart.

Lorri Dudley has been a finalist in numerous writing contests and has a master’s degree in Psychology. She lives in Ashland, Massachusetts with her husband and three teenage sons, where writing romance allows her an escape from her testosterone filled household. Find her online at www.lorridudley.com.

Priscilla Middleton’s character begged for her story to be told. The Captain’s Quest is the fourth book in the Leeward Island series. While it can read as a stand-alone, the heroine, Priscilla, had a brief guest appearance at the beginning of book two, The Merchant’s Yield, as Lottie’s closest friend. With Lottie now living on the isle of St. Kitts, that left Priscilla to navigate the London season all on her own. I imagined what mischief a young woman would find whose parents allowed her too much freedom, especially with her friend, the voice of reason, across the Atlantic.

When my close friend moved to Michigan, the loss of her physical presence left me feeling disoriented, lost, and out of place, even in familiar surroundings. There was loneliness, a desperate need to replace what was missing, and fears about being forgotten. In Lottie’s absence, Priscilla clings to an unhealthy friendship, landing herself in a precarious situation, with no other option but to hide aboard her brother’s ship to save her reputation and that of her family.

The biggest issue with running from problems is that we can’t run from ourselves. Priscilla avoids one catastrophe only to walk right into another as Captain Tobias Prescott takes command of the ship. She blames the brooding captain for her predicament only to realize she’s battling the wrong enemy. The more Priscilla tries to hide from the problems she must face within herself, the further she drifts from everyone she knows and the chance to be fully loved.

Although Priscilla’s story was drafted pre-pandemic, her struggles are similar to those that surfaced during the lockdowns. Anxiety, loneliness, isolation, fear, and feelings of being disregarded mounted as the pandemic spread. Vacations, Thanksgivings, and Christmases were canceled. Families couldn’t visit or see each other—the feeling of being forgotten sliced open raw wounds.

Cory Ashbury’s song Reckless Love was popular as I plotted The Captain’s Quest, and the lyrics from the book of Matthew of how God will leave the ninety-nine to chase after the one lost sheep developed Priscilla’s story. Through its comical mishaps, dramatic twists, and struggles to prevail, The Captain’s Quest is a reminder of the heights, depths, and lengths that our great God will go to show His passionate love for us.

To celebrate her tour, Lorri is giving away the grand prize of a $50 Amazon Gift Card!!