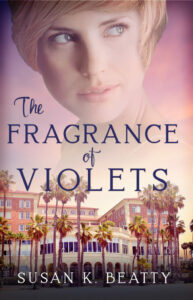 This is book 2 of the Faces of Courage series, Women's Christian Fiction.  Fiona was abandoned as a child and has had to deal with it all her life.  When her career of managing weddings, brings this man back into her life, she feel the pain all over again.  Nason, the dad that left, realizes that Fiona is not forgiving him for leaving and doesn't understand why.  Can they deal with the past?  Will Fiona be able to get her job done?  Does Nason understand forgiveness?  Will Fiona be able to forgive?

I would recommend this book to anyone that has had to deal with forgiving someone in there life, no matter how hard it is.  It is a story that could really happen in someone's life and forgiving is a big thing.  this is book 2 of the series, however, can be read as a stand alone.

Book: The Fragrance of Violets

Life crushes us with its weight sometimes.

Fiona’s father abandoned her when she was twelve. So when she learns that he’s the groom’s father in the wedding she’s been assigned to manage, all the old hurts resurface. Maybe if he’d just explain himself and ask forgiveness, she’d get over the pain he left her with—pain she obviously hadn’t left behind after all.

When Nason discovered he wasn’t Fiona’s biological father, and when her mother tried to sabotage his marriage, he felt like he had no other option but to leave and never look back. Running into her again—awkward to say the least. And he can’t understand why she feels betrayed—why she expects him to seek forgiveness.

As if life weren’t complicated enough, Fiona meets Trevor, which sparks a possible romance. New faith, an overdose, and revelations combine with Trevor’s discipleship and shows her how forgiveness really works.

What will it take for Nason to swallow his pride and see how his actions hurt an innocent child?

The Fragrance of Violets—as Mark Twain once said, “Forgiveness is the fragrance that the violet sheds on the heel that has crushed it.”

Who says you can’t begin a new career after middle age? Certainly not Susan K. Beatty. She is passionate about writing about finding courage through faith and grit, particularly through the trials of breast cancer and other life trials. Her daughter is a metastatic breast cancer “thriver” and has been an inspiration for her writing. Susan’s first novel, Faces of Courage, debuted May 2021, as part of the Faces of Courage series, including several novelettes. She is also the author of An Introduction to Home Education (AKA California Homeschool Manual). Susan is a professional writer/journalist and is active in the writer community. She is proof you can begin a fiction writing career at any age.

The Fragrance of Violets’ story has yearned to be told for many years now—before I created my tagline, Courage: The Intersection of faith and grit. But it fits perfectly. A similar situation existed a long time ago in the life of an acquaintance. I thought all parties handled it badly, and I longed to make it right. Of course, being an outsider, the only way I could make it right was by creating a novel.

Fiona and Nason, the main characters, are total figments of my imagination, and the details of the story are substantially different. But the core, abandonment, the need to ask for and grant forgiveness, and the courage to meet them, is real and universal.

I desired to show that even when we think we’ve done nothing wrong, we need to seek the Lord and ask Him to reveal where we need to own up to our mistakes and seek forgiveness. Also, I wanted to show that although it is difficult to forgive when we’ve been horribly wronged (and how horrible to have the person you thought of as your father abandon you and with no apparent explanation or remorse), it’s possible with courage. The courage that comes from faith and action.

My prayer is that Fiona and Nason (despite his past) will inspire readers to find their own courage through whatever situations in which they find themselves.

To celebrate her tour, Susan is giving away the grand prize package of a $25 Amazon gift card and copy of the book!!