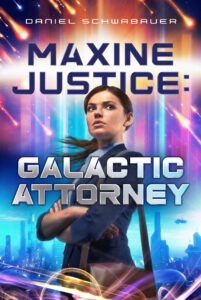 This book is a Science Fiction store, with some humor and imagination.  Maxine is hired by alien's to help them win their case in front of the United Nations.  They want to be able to health humanity and get a percentage of the earth.  Maxine takes the case and finds herself in more pressure from the earthlings then she expected.  She must fight to stay safe and keep her career in order.  Can she save earth and also help the aliens?  Will she be able to show that she wasn't the best student in law school, but she is a good lawyer?
If you like a story with using your imagination and sci-fi reading, this is a story for you to read.  It is very different then I am used to reading, but was able to get through it.  It does have lots of legal terms that may be a hard to understand.  Maxine is a character that grows on you and by the end you want her to succeed. I could see this made into a Sci-fy comedy movie.
Disclosure of Material Connection: I received a complimentary copy of this book from Celebrate Lit Books. I was not required to write a positive review. The opinions expressed are my own. I am disclosing this in accordance with the Federal Trade Commission's 16 CFR, Part 255, "Guides Concerning the Use of Testimonials and Endorsements in Advertising.

Can Justice Save the Earth from Extinction?

Maxine Justice is an ambulance-chasing lawyer desperate for relevance and cash when aliens hire her to represent them before the United Nations. An off-planet consortium wants to heal humanity of every natural disease in exchange for 30% of Earth’s gold reserves.

The deal launches Max to legal stardom and makes her an international target for assassins. New Pharma, Sky Cross, MediCorp—the big medical companies all have good reasons to want Max out of the way. Worse, she discovers her alien clients may be planning something more sinister than anyone has imagined.

Can a lawyer who failed the bar exam three times find some way to save the world from global and interstellar conspiracies? Or will humankind’s future end in a galactic courtroom?

Daniel Schwabauer, M.A., is a lifelong reader of speculative fiction. He studied the genre under science fiction great James Gunn before graduating with honors from Kansas University’s Masters program in Creative Writing. Winner of the Eric Hoffer and Ben Franklin awards for his middle grade fantasy series, The Legends of Tira-Nor, Daniel enjoys riding his motorcycle on country roads and pondering other worlds. He lives in Kansas City with his wife and dog.

What in the World is a Galactic Attorney?

Maxine Justice: Galactic Attorney started as a short story concept I began twenty-five years ago but never finished. Back then I thought it would be interesting to write about a hostile takeover of the planet by aliens. But instead of using advanced weaponry and space ships, my aliens would conquer Earth the way modern corporations subsume smaller competitors—through the law.

The main problem with my original story idea was the lack of a suitable hero. It wasn’t until 2018 that an off-handed remark from my daughter provided the inspiration I needed to rethink the entire storyline, and an irrepressible, snarky young lawyer named Maxine strode into my imagination and began a hostile takeover of her own.

What if Maxine’s search for real solutions to our most corrupt systems led her to realize that Earth’s  doom may not come through the cleverness of intergalactic adversaries, but via the corruption of its apex predator?

Could Justice save Earth from extinction then?

To celebrate his tour, Daniel is giving away the grand prize package of a $50 Amazon card, a signed copy of the hardcover!!