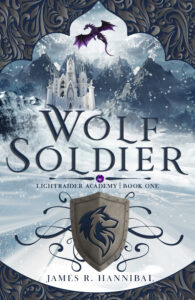 This is a young adult fantasy read and book one of the lightraider academy book.  We meet the students of the Light raider academy and their fight against darkness to survive.  Each of the characters have their own senses and faith to take down the evil and darkness to make sure that their land is safe again and everyone has to keep the faith to be safe.
This is a young readers book, if they enjoy fantasy reads, then they will enjoy this one.  I am not a fan of this type of reading, it does keep your imagination moving and wondering.  If you want to read a book of many different characters and fantasy ideas, read this book.

The fate of the Dragon Lands are at play.

The knights of the Lightraider Order disappeared nearly two generations past. Now, the Keledan have withdrawn behind their barriers, and the Dragon Lands of bordering Tanelethar are overrun with dark oppression. The people are living in disobedience to the Rescuer who freed them long ago.

A shepherd boy, Connor Enarian, and four young initiates rekindle the fires of the Lightraider Order in the hope of striking out across the mountains into Tanelethar to destroy a portal and stop an impending invasion.

Once in the Dragon Lands, Connor learns that the key to success lies with a missing Lightraider spy and his lifelong companion, a talking silver wolf. Can Connor and his friends find the spy before the portal grows too large to destroy? Or will a local young woman—or Connor’s own family history—betray them?

The dangers and secrets of Tanelethar test both trust and loyalty, and to save his homeland, Connor may have to sacrifice his innermost dreams.

Former stealth pilot James R. Hannibal is no stranger to secrets and adventure. He has been shot at, locked up by surface to air missiles, has hunted insurgents with drones, and was once chased by an armed terrorist down a winding German road. James is the Carol Award winning author of the Clandestine Service series and a three-time winner of the Silver Falchion Award for Juvenile Fiction for his Section 13 series.

Did you know Wolf Soldier is set in a fantasy world created for a 1980s tabletop game? DragonRaid was an “adventure learning system” designed by Navigators author Dick Wulf. It used elements of choose-your-adventure stories and roleplaying games to teach Scripture memory and application. The game immersed players in the fantasy world of EdenAgain, where their hero characters applied Scripture to solve puzzles and battle “dark creatures.” Using God’s word in these allegorical challenges engaged the mind to increase understanding and retention.

I was one of the DragonRaid’s teenage fans. But the game vanished after only three years, buried by a ranting televangelist who created a campaign against it in a failed attempt to distract the world from his nefarious activities. Even worse, when the game vanished, it left us all on a cliffhanger—The Moonbridge Raid Campaign, Part One of Three.

Years later, with budding teens of my own, I sought out an old boxed set.  When we ran out of the original stories, I wrote some of my own, and after playing these new stories with my little group, I sent them to the man who’d sold me the box. He sent them on to Dick Wulf, the original creator of the game.

Long story short: Dick, who had been given only a short time to live, asked me to take over the fantasy world and carry the game forward under the banner Lightraiders, including the task of novelizing the world.

That’s where Wolf Soldier came from. And I’m so excited to see where the characters and the Lightraider Order will take us. Dick went home to Heaven on July 6, 2021, but you can find the encouragement of his foreword inside Wolf Soldier.

By the way, I didn’t forget about the cliffhanger. Before turning in the novel, I completed Parts Two and Three of the Moonbridge Raid Campaign using drafts Dick Wulf wrote. Funded by a donor, our burgeoning Lightraiders game company matched the grand style of the original 1980s adventure guidebook, maps and all. Whew! What a relief to finally scratch that 35-year itch!