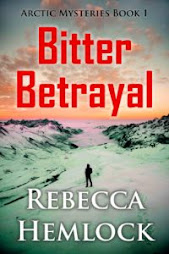 This is book one of the Arctic Mysteries Novella series.  It starts out with a plane crash and with the survivors wondering what has happened, just in the first few pages....  Luke is being held captive and the mystery is the ring that everyone wants.  It is a very short read and leaves the reader to imagine many things going on with the story.  I was a bit lost and trying to figure out what was really going on. Because it is a very short read, it can be finished in a few hours.  I would have liked it to have more of a background at the beginning or have flash backs to what the purpose was and of what the ring is all about.
If you like a sci-fy, dramatic adventure from different worlds, then you will get this book.  I didn't like the cliffhanger at the end, continuing the story book 2 for an ending.  Because it is so short, maybe put both books together as one full read.  It is good for teens that don't like to read long books and if you want a quick read and don't care that you will have to wait to find out the end of the story...... Overall it was ok for my type of reading, liked the drama and adventure, just needed more of the details.
Disclosure of Material Connection: I received a complimentary copy of this book from Celebrate Lit Books. I was not required to write a positive review. The opinions expressed are my own. I am disclosing this in accordance with the Federal Trade Commission's 16 CFR, Part 255, "Guides Concerning the Use of Testimonials and Endorsements in Advertising.

Scientist Luke Wilkins has always been one step ahead of Lee, his longtime rival. Luke and his best friend Josh start off on an expedition to Nunavut’s territory for an environmental study. All seems well until their plane crashes in the middle of nowhere. As Luke regains consciousness, he discovers that he’s being held prisoner by Lee and his men.

Luke has something that Lee wants. A ring that has been shrouded in mystery for centuries and Lee will do whatever it takes to get it. Luke fears that he will never see his family or friends again unless he hands it over.

Lee will stop at nothing until the ring is his, but would he go as far as murder?

Rebecca Hemlock has written stories her entire life. She always knew she wanted to be a writer. That dream became a reality for her in 2016 when she landed her first job writing for her local newspaper. That same year, she was able to publish a children’s book under the pen name R.C. Burch.  With a little help from some wonderful people, Rebecca  was able to move forward in her writing career.

Rebecca published two more children’s books the following year, but children’s fiction was only the beginning. She self-published a novella in 2019, titled Bitter Betrayal, Arctic mysteries,  and completed her first novel in 2020. When she is not writing, Rebecca enjoys traveling, reading, and spending time with family.

This book was so much fun to write. There are so many places in this world that have been barely touched by man. I took an interest in Northern Canadian culture after watching a documentary about how the Vikings first settled there.

After reading through the different artifacts that have been found there, Bitter Betrayal was born. I knew this would make a tremendous mystery-suspense story. Whenever I start a Mystery Suspense book, I usually like to add a dash of romance with a historical twist.

Luke Wilkins is someone that most single dads can relate to. He has a difficult time trusting other people. Especially when it comes to his son, Adam. He must trust those around him if he’s going to stay alive.

Bitter Betrayal teeters on the concept of how far someone would go for what they want. If you love Clive Cussler as much as I do, then this Novella is for you.

To celebrate her tour, Rebecca is giving away the grand prize of a $25 Amazon gift card!!