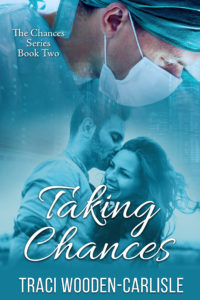 This is book 2 of the Chances Series.  This is a Christian romance between Andrew and Pietra.  They both come from different ways of life styles but find that they have an attraction to each other.  Andrew has spent his life with the passion for healing people until he finds an attraction to Pietra, his life long friend.  Can this be more than a friendship to him?  Will he give it all up for her??  Pietra is shy and content with her life, her friends want her to find the perfect guy for her.  Someone to treat her like a queen and give her everything.  Can Andrew give up his passion for healing and become the guy that Pietra's friends want for her?  Does Pietra listen to her friends wants or follow her own heart?
This is book two of the series, but can be read as a stand alone.  I didn't read book one and had no problems following this story line.

Friendship always seemed like the safest bet, but the possibility of love may make theirs a chance worth taking.

Almost from birth, Andrew Wolfe knew the majority of his life would be spent healing people. It’s a passion that he embraces with all of his being until a dark-haired, gray-eyed girl looks up from a pile of books between them and challenges the space in his heart for his first love.

Unsure if he can have Pietra along with the life he’s been destined, Andrew remains friends with Pietra for years without revealing his true feelings, but love won’t be denied forever.

Those who’ve met Pietra Rivera think she’s a shy but kind and generous woman with intelligence to rival the best minds in medicine, and they would be right.

They also believe that the ideal man for her would be an equally nice guy, with like ambitions who would move mountains for her and again they would be correct. But is Andrew that man or is she headed for heartbreak?

Will either of them take the chance at more than friendship with the other or will lifelong expectations and obligations keep them in the friend zone?

Traci Wooden-Carlisle began writing poetry and short stories as soon as she was able to form words on paper. She used that as a way to create worlds, as well as, to communicate with God. A native of Los Angeles, California, she grew up attending United Methodist Church under the leadership of a pastor whose heart was for youth. Once she finished college she found herself at a loss. She felt caught in the transition between childhood and adulthood. She surrounded herself with saints and volunteered her services as a graphic artist. Through the early-morning prayer, all night Friday prayer and 3-day shut-ins she started on her journey toward her most desired gift, an intimate relationship with God.

She began writing to publish in 2011 and enjoys writing stories that provoke thought and evoke emotions. Her desire is to draw readers into the lives of her characters and share messages of God’s love, His faithfulness and peace. The messages in her books speak to her way before they speak to her readers.
Traci lives in San Diego with her husband, David. When she isn’t writing she does some light traveling or assists people with their physical fitness, creates graphics, designs pretty things for her jewelry business and swag for authors.

Thank you for joining my blog tour. I am so happy you have decided to participate in this part of the journey with me.

I have had the story of Andrew Wolfe and Pietra Rivera in my heart from the moment Pietra’s roommate, Meagan considered the sometimes awkward, silences between her two best friends. Even as I finished other books and series whose characters yelled louder to be heard than Pietra and Andrew I could sense them waiting patiently for their turn.

Almost from the moment I put the proverbial pen to paper I saw their personalities and characteristics form them into people I would have loved to have as friends. Coming from such different backgrounds I wondered if their upbringings would work for or against them as they interacted with one another. One would think it unlikely that Pietra, who was raised by her Mexican father and uncles after the death of her mother, and Andrew who grew up under the tutelage of his grandfather, the tribe’s medicine man, that these two would have anything in common, let alone become the best of friends, but they wouldn’t have it any other way. Well, until the third person in their group of the ‘Three Amigos’ gets engaged, leaving them without the buffer they’d grown accustomed to.

For once, I thought I would get to type out a story with a straight line from start to finish, but these characters had a couple of twists and turns to send me through, so I sighed and strapped in for the ride.   You didn’t think I was in charge, did you? I’m just the messenger, carrying the stories of extraordinary people across the border between fiction and reality.

So join me in the small town of Chance, Virginia, where a handsome, yet awkward, NFL player does everything but move mountains to make sure his grandmother is safe and happy, and an incredibly good looking neurosurgeon searches for the answer to where holistic healing fits into a world designed to treat one cause at a time. Oh yes, and the women who, with the grace of God, give them a chance at love.

I hope you enjoy them as much as I do.

To celebrate her tour, Traci is giving away the grand prize of a Kindle Fire!!